Every week we’re taking another step on the journey to building a 7-figure one person business including:
See an example of the Rogue Mogul newsletter. 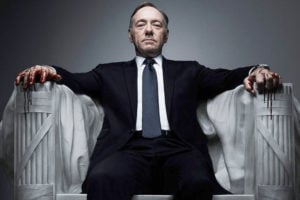 You started a blog and thought it would make money.

Perhaps you started it to drive traffic to your business but found out that was harder than you thought.

Maybe you kept fighting. Maybe you gave up. Or like most, you kept writing… occasionally.

Perhaps you’re at that breaking point now. If so, don’t give up. You’re on the right track.

If you stopped, then it’s time to get back in the saddle. Either way, there is one thing I want you to do differently this time but first I need to introduce you to someone.

If you haven’t yet watched “House of Cards,” it’s the Netflix Original Series featuring Frank Underwood (Kevin Spacey). Frank, whom I would like to introduce you to, is a power-hungry Congressman, who is smart, cunning, and always means business.

While Frank has given us many memorable quotes, one, in particular, stands out because it tells bloggers and online businesses what their single most common mistake is and how to fix it. It’s a mistake that if avoided, can open the floodgates to success, and all it requires is a bit of patience.

After a conversation with Remy (a lobbyist), Frank turns to the camera and says,

Such a waste of time, he chose money over power. In this town, a mistake nearly everyone makes.

Money is the McMansion in Sarasota that starts falling apart after ten years.

Power is the old stone building that stands for centuries.

I can not respect someone that doesn’t see the difference.

Hear it in Frank’s own words:

Now just let that sink in…

How many times have you, or someone you know, focused on the money only to give up later when it didn’t come as easily as hoped.

Begin there and no matter how your business makes money, it will become the old stone building, not the crumbling McMansion.

House of Cards Number One Rule – Power Before Money

In Franks world, power often serves a manipulative purpose and takes the form of lies, favors, and blackmail.

For bloggers and content marketers, one would never condone such dark endeavors, but the advantages of having power are no less significant, because

In the online world, we gain power by establishing trust, authority and audience and usually in that order. It’s not dark, evil, or manipulative.

Power is transparent, honest (sometimes brutally), and sincere. And because of those characteristics, it garners respect, loyalty and the ability to ask for things that money can never buy.

If you want to build a strong power base give until it hurts, before you ever ask for anything.

If you build trust, your early audience will see you as an authority. As you become an authority, it’s easier to spread the word and build your audience.

Once you’ve built a trusting, loyal audience, selling will come much easier. And you don’t need an audience of millions; 1000 will do.

Gaining power takes time, effort, determination, and sincerity. If you’re a fraud, your audience will see right through you. Once established, our foundation of power will grow by continuing to listen to our audience and giving them what they want and need.

Fortunately, we are much nicer than Frank with our power. After all, this isn’t Washington.

If you’re still focused on making money from your site your first step is to start focusing on building a powerful foundation. Power is the currency that will pay you for a lifetime.

Don’t fail to see the importance of power before money.

I can not respect someone that doesn’t see the difference, and now, neither will you.